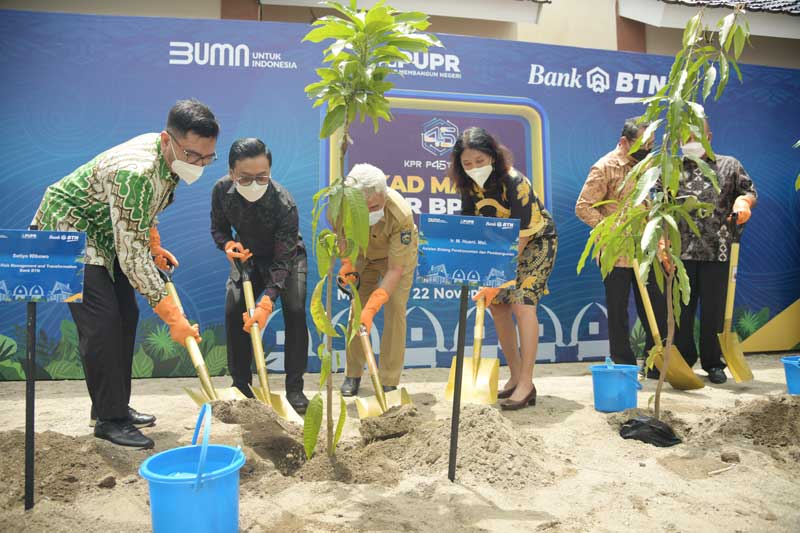 "We encourage every developer to pay attention to environmental aspects in housing development, so we are committed to providing one tree seed for one house, so that the housing environment can be green," said Director of Wholesale Risk and Asset Management of Bank BTN Elisabeth Novie Riswanti at the BP2BT Mass Credit Agreement and Drive Thru Agreement at Bellpark 2 Housing, West Lombok, West Nusa Tenggara (NTB), Monday (22/11/2021).

Novie revealed, Bank BTN will continue to encourage environmentally friendly home financing by cooperating with various parties such as PLN for induction stoves. This is to encourage the government's target to make the program to build one million houses and one million induction cookers a success, which is a diversion from LPG, so that it can be achieved.

"We also encourage the implementation of going green, so that in this Mass Credit Agreement event, 1,000 units of trees are planted. Later, Bank BTN plans to require or ask developers to oblige to plant trees in every unit of their house. Our target is to plant 45,000 trees in the 45th KPR Anniversary event,” he explained.

According to Novie, West Nusa Tenggara (NTB) is one of the options for the mass mortgage contract this time because the area's potential is still very large. Moreover, President Joko Widodo has inaugurated the Mandalika circuit which will also trigger economic growth in NTB, especially Lombok.

The existence of the Mandalika circuit, he continued, is not only pride for the people of Lombok or NTB, but also the Indonesian people. "We hope that this circuit of pride will have an economic impact that will encourage the economy to move, including the housing sector," he insisted.

Regarding the BP2BT Mass Credit Agreement event in West Lombol, Novie said, there were around 1,300 housing units that had contracts with debtors. This will certainly support Bank BTN's target of distributing BP2BT mortgages of around 11,000 units by the end of 2021.
"In the series of the 45th KPR Anniversary, we have a target for BP2BT of 11 thousand units. Last November 20, it had reached around 6,357 units. This figure is quite extraordinary so that BTN is optimistic that by the end of the year it can reach 11 thousand," he said.

Meanwhile, the Regent of West Lombok, Fauzan Khalid, appreciated the attention of banks and developers in fulfilling home ownership in West Lombok. "The area of ​​this housing development site (Bellpark 2) is about 22 hectares and this is extraordinary, hopefully it can help the needs of our community to get decent housing," said Fauzan.

According to him, the majority of housing in NTB was built in the West Lombok area, for that he really appreciates Bank BTN's efforts in planting trees in the housing being built.

“In carrying out development we must also pay attention to the surrounding environment, what we are doing now is the downstream which is important to pay attention to as well as the upstream.  This is the task of the district, provincial and of course the central government," he said. he concluded.