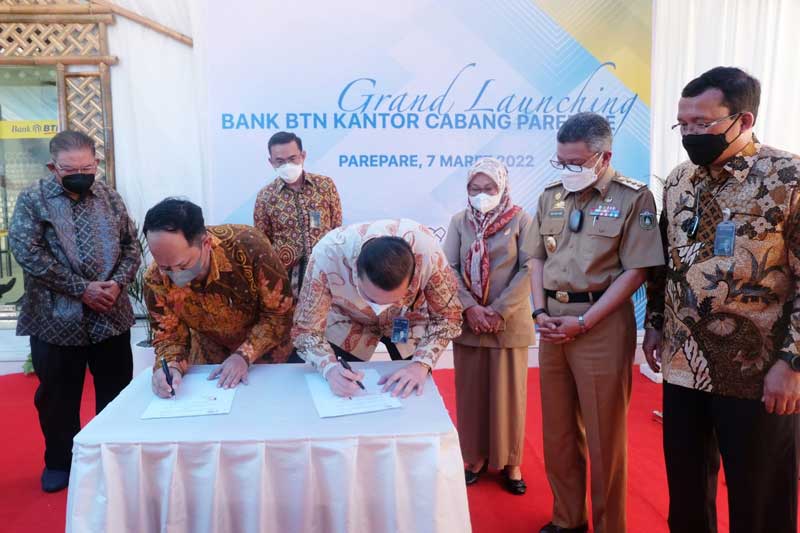 Parepare, March 7, 2022.  The recovery of the economy in eastern Indonesia, spurred  PT Bank Tabungan Negara (Persero) Tbk to expand to take advantage of the economic potential in a number of areas, including in Parepare City, South Sulawesi.

South Sulawesi Economy  grew 4.65% in 2021, while the City of Parepare was recorded at 4.41% recovered from 2020  by strengthening the trade, processing and repair industries.

To optimize the banking service business at  City of Parepare, Bank BTN upgraded the status of a Sub-Branch Office to a Branch Office.

Haru added, the economic recovery in various sectors of the City of Parepare will create a need for housing/property which is the main focus of Bank BTN's business. Haru assesses Bank BTN according to its competence  As a bank that focuses on housing, we see the potential for lending to support the very large housing sector in Parepare City, considering that currently Pare Pare City is an industrial area that is growing rapidly.

"On the other hand, the support of banking services through savings products is also a potential that is no less important as a bundling of service delivery in the housing sector which is also managed by Bank BTN," Haru said

Based on a study by Bank BTN, the City of Parepare recorded a significant population growth in In the last 3 years, with a population of around 146 thousand people living in industrial areas, it is necessary to have easy access to housing loans for residents.

In this regard, Bank BTN Parepare Branch Office has previously partnered with around 72 housing developers to optimize the distribution of subsidized mortgages in Parepare City.

“Upgrading the status to become a Branch Office will facilitate coaching with housing loan debtors, monitoring and elaborating on potential partnerships with agencies/private sectors in the City of Parepare which we have not yet embraced,” Haru said.

Haru hopes that by increasing the status of the Bank BTN Branch Office in the city of Parepare, it can provide better and faster service. Meanwhile for Bank BTN itself, business targets such as the realization of mortgages and the collection of Third Party Funds are increasing.

"We are optimistic, at least in the first year after the status is raised there will be more than 350 new mortgage debtors that we attract with the realization value of new mortgages reaching more than Rp 48 billion," Haru said.